After taking a look at the US and British Millennium stamps, it’s now Canada time! If you want to score high in quizes or acing your Canadian citizenship exam, then this read is for you. But of course, everyone is welcome to take a look!

The Canadian Millennium stamps were issued on two separate occasions. A first bulky set of 17 sheets each made of 4 large-format stamps (totaling 68 stamps) was issued on September-15, 1999. A second set made of 3 single stamp minisheets was issued on October-12, 1999. All stamps from The Millennium Collection/La collection du millénaire are inscribed bilingually in English and French.

The first set includes all sorts of historical, cultural, economic and political landmarks. The large-format stamps are a pleasure to look at. The second one features 3 stamps issued in three different printing technologies – like a short course in the history of stamps – where they’ve come and where they’re headed to in the new millennium. 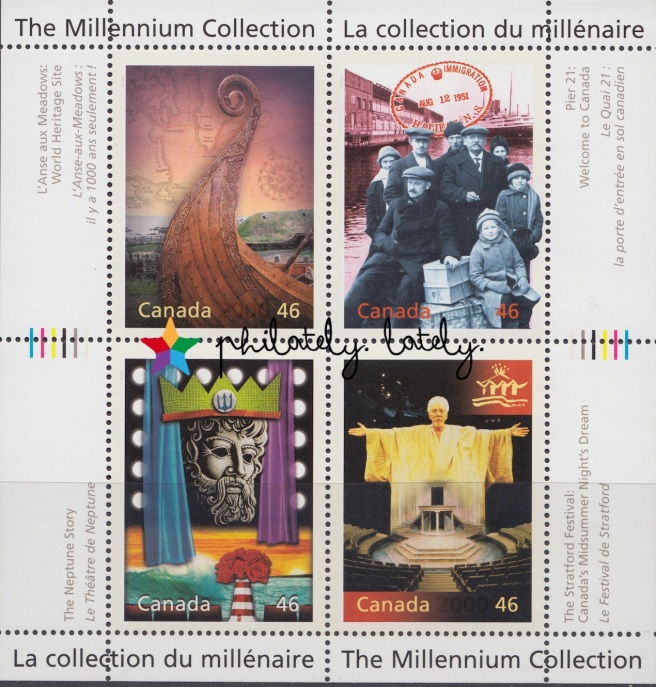 Pictured above: the World Heritage site of L’Anse-aux-Meadows; Pier 21 immigrants; the Neptune Theater; and the Stratford Theater Fetival.

END_OF_DOCUMENT_TOKEN_TO_BE_REPLACED

After taking a look at the British Millennium on Stamps, it’s now high time to look at another extraordinary Millennium collection, this time the one minted in the USA. The USA was one of the pioneers of Millennium stamps, starting their well-devised series as early as 1998. A total of 10 sheets, each with 15 stamps were issued between 1998-2000. Their topics were announced from the very beginning, and are present in the frame of the sheet: art, sports, historical events, technology, entertainment, science, political figures, and lifestyle. Among the many firsts of this Millennium series, I give you a hint: this was the first time the word ‘lifestyle’ made it to a stamp! Speaking of new words – each sheet also contains the new words allegedly coined during the period. Truly educational.

Generally speaking, the stamps are devoted to the American spectrum of events, however, epoch-making events from other geographies are not disregarded completely. Each sheet is devoted to one decade of the 20th century, starting chronologically from the 1900’s and ending in the 1990’s. In addition, each sheet has a title, that sums up the zeitgeist and is supposed to be found on some of the stamps of the sheets. In addition, each gummed stamp has a printed explanation on the back.

The 1900’s: The Dawn of the Twentieth Century 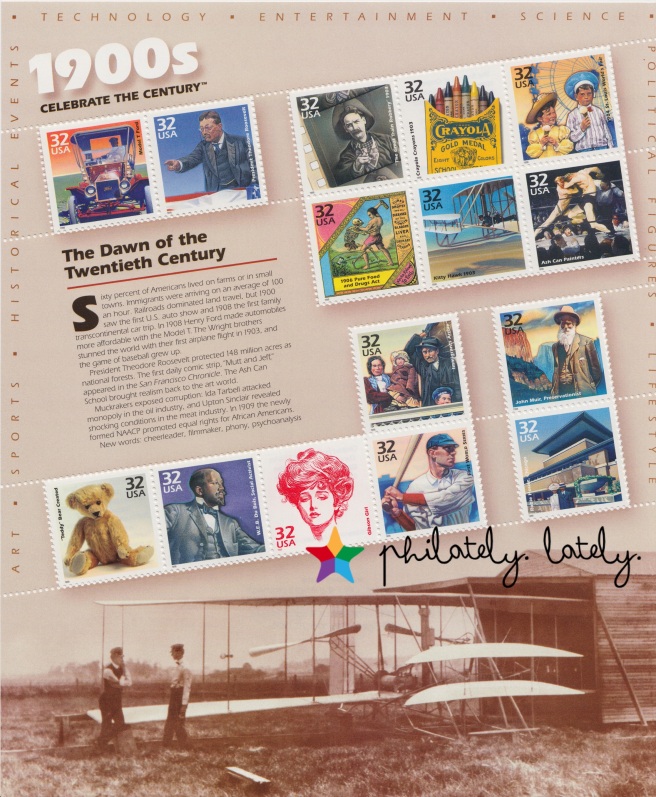 Pictured above: the Tin Lizzie Ford model; Theodore Roosevelt; the movie “The Great Train Robbery“; Crayola pencils; the St. Louis World Exhibition of 1904; the 1906 Pure Food and Drugs Act; the Kitty Hawk plane of 1903, the Ash Can painter’s movement; the arrival of immigrants; the nature preservation work of John Muir; the creation of the legendary ‘teddy’ bear; the social activism of W.E.B. du Bois; the Gibson Girl fashion; the first World Series of baseball; and Frank Lloyd Wright’s Robie House in Chicago.

END_OF_DOCUMENT_TOKEN_TO_BE_REPLACED

Numerous countries put their best on for the turn of the millennium, and Royal Mail is no exception. Millennium collections are usually large sets of stamps, separated into subsets, that approach, thematically or randomly the events of the previous millennium, from the perspective of the issuing country, or globally.

The British Millennium collection of stamps was issued between 1999-2000. Each design includes the inscription ‘Millennium’, the year of issue and a serial number. The designs for 1999 looked back over the previous millennium under 12 different themes. The designs for 2000 highlighted projects undertaken to celebrate the millennium.

Set I – The Inventor’s Tale 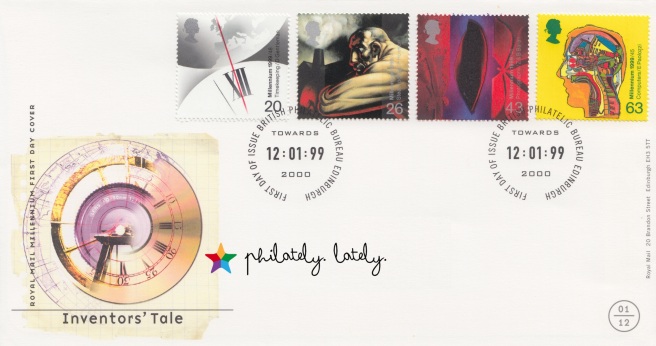