When I started research for this article, I was hopeful to find a lot of examples of children’s songs on stamps. I could find numerous childhood activities: games, toys, holidays, learning, entering adulthood – everything is there. I even found a niche topic that I would like to explore in the future – childhood looked at with nostalgia: how children in days of yore were having fun (with the unclear implication whether nowadays children have the same amount of fun). However, I couldn’t find many examples of children’s songs on stamps.

The reason I researched this is because I want to talk today about one of my all-time favorite series of stamps. Nothing fancy. It’s a series of stamps from Japan called “Japanese Song Series” (in Japanese: 日本の歌シリーズ) and which was issued between 1979 and 1981. The distance in time alone makes the stamps already “vintage” to some extent, but the thing that really attracted my attention was their attentive, almost peaceful design and the variety of songs described.

Now if you don’t have any Japanese tune you can’t get out of your head, maybe you want to click on the Youtube link below:

Of course you can skip that and directly go to the topic of stamps (since everyone knows that children’s songs are infectious and that’s part of their scam). So the series of stamps I am talking about includes as much as 18 stamps – issued in pairs of 2. Each stamp includes the chorus of the song in musical notation and text. That makes the stamps extra lovely.

END_OF_DOCUMENT_TOKEN_TO_BE_REPLACED

Astro Boy (name in the original Japanese: 鉄腕アトム ・Tetsuwan Atomu) is one of the most popular heroes of manga. The earliest Astro Boy manga, published in 1952, gained immediate success – and made his creator, Osamu Tezuka (Japanese: 手塚 治虫) one of the main figures of international children’s literature. Osamu Tezuka befriended among others Walt Disney and Mauricio de Sousa, and was nominated an honorary chairman of the Superman Fan Club in Japan.

If you like Japanese animation on stamps, then you might want to take a look at our article devoted to Doraemon.

Placed in a futuristic context where humans cohabit with robots, the adventures of Astro Boy relate to the joys and sorrows of being a child, even if a child-robot. Astro Boy is lovable and instantly captivating, despite the manga being almost 70 years old. His charisma never faded, and even in the 2000’s movies and video games featuring Astro Boy are still topping sales.

Astro Boy stamps are not numerous, however, they are really philatelic gems. The stamps presented below all come from Japan – Astro Boy’s homeland.

END_OF_DOCUMENT_TOKEN_TO_BE_REPLACED

Doraemon (Japanese: ドラえもん) a.k.a. the Gadget Cat from the Future is the brainchild of  the cartoonist duo Fujiko Fujio (Japanese: 藤子 不二雄 ). Doraemon indeed comes from the future, from the 22nd century and his mission is to help the clumsy and lazy schoolchild Nobita Nobi (Japanese: 野比のび太). There are about 45 volumes of manga having Doraemon as main character, but Doraemon’s success did not limit to Japan and to manga. There are thousands of TV episodes of animes, books, memorabilia, and even a museum devoted to Doraemon.

I personally have a soft spot for Doraemon as the Doraemon manga (featuring the logo above) were among the first manga I read. Luckily, they are available in a learner’s pack of 10 volumes of bilingual manga, otherwise, I would have often had trouble with the original Japanese. Of course they are translated integrally in English, but where would be the fun? 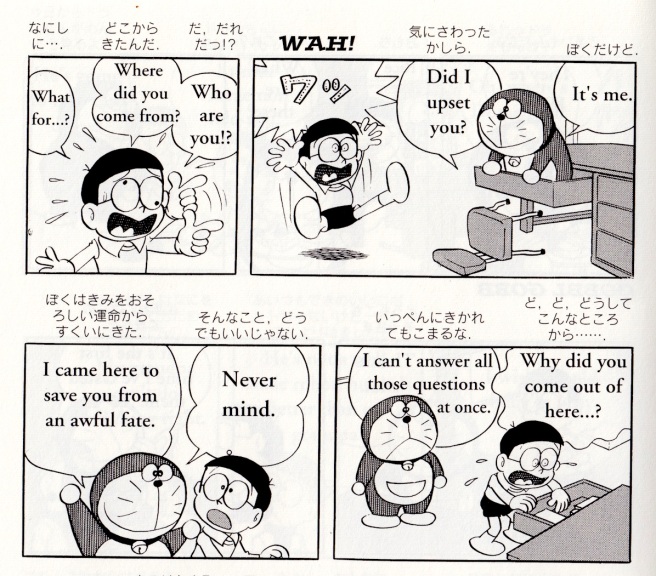 Above you can see Doraemon’s debut (yes, he entered the 20th century through a desk drawer) and the effect he had on Nobita.

Since I mentioned Doraemon memorabilia, of course one item that could not be missing is Doraemon-themed stamps. Japan is the only country I know that has used Doraemon on stamps. It has done so since 1997, and the number of Doraemon stamps is ever growing.

END_OF_DOCUMENT_TOKEN_TO_BE_REPLACED

The wealth of stamps depicting the character Tintin, drawn by Belgian cartoonist Hergé is very appealing to the stamp collector. However, not all items are readily available. The popularity of Tintin caused also the issue of numerous Cinderella issues.

Hergé (the pen name of Georges Prosper Remi, 1907-1983), is the author among others of the very successful Tintin comics. They were published as installments between 1929 and 1986 (the last one posthumously, and unfinished). They chronicle the travels and adventures of a young reporter called Tintin, accompanied everywhere by his dog Snowy (Milou in the original French). Alongside Tintin, various recurrent and memorable characters appear, such as Captain Haddock (French: Capitaine Archibald Haddock),  Professor Calculus (French: Professeur Tryphon Tournesol); detectives Thompson and Thompson (French: Dupont et Dupont), or Bianca Castafiore. All of them have been immortalized on the ensuing Tintin-themed stamps.

Below you will find most of the Tintin stamps, including some Cinderella issues.

Abkhazia is a disputed Georgian territory, recognized as independent by South Ossetia, Transnistria, or Republic of Artsakh – themselves disputed territories. Russia and Nicaragua, as well as Vanuatu and Tuvalu range among the real countries that recognize the independence of Abkhazia. While it is a matter of debate why Tintin on Abkhazia stamps, the collector can be happy to add as many as 40 designs of Tintin stamps to their collection, issued in 4×2 sheet format. The year of issue is unknown. Abkhaz Post does not exist. 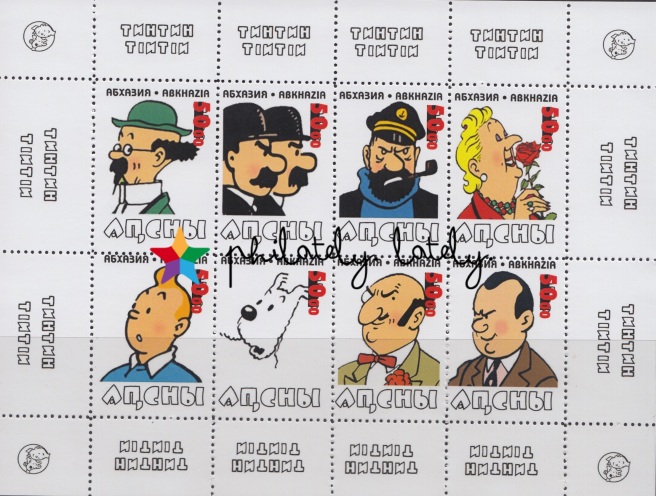 END_OF_DOCUMENT_TOKEN_TO_BE_REPLACED

Astrid Lindgren (1907-2002) is allegedly world’s fourth most translated author of literature for children, right after far-reaching names such as Christian Andersen, the Grimm Brothers, or Enid Blyton. Her characters are world-famous, including Pippi Långstrump (Swedish original, in English: Pippi Longstocking). Recently, indirect references to her work and characters have been spotted in literature of an altogether different genre, most notably with Stieg Larsson , who used Pippi’s home Villa Villekulla as reference and another character’s name, Kalle Blomkvist, in his “Millennium” trilogy. 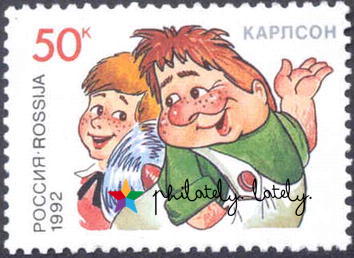 Russia honored the life and work of Astrid Lindgren with this 1992 stamp depicting her character Karlsson from “Karlsson on the Roof“. The book was made into an animation film in the 1970’s, and the film subsequently became very popular in the then USSR.