This article refers to the series of stamps issued by the Spanish Post in 2009, as single or double releases, totaling 12 stamps and picturing Spanish traditional dances from different regions. The stamps are issued as single stamps, stamps with vignettes, or minisheets, and have different sizes and orientation in order to capture the dynamics of the dances. The images combine skillfully photography with computer design, but the ultimate result is quite truthful. Several types of dances from several Spanish regions and dependencies are illustrated in this very nice series.

I recommend this series for beginner stamp collectors as it is quite cheap and not so difficult to collect. The fact the stamps were not issued in one release, but separately, adds to the thrill of collecting, and assembling such a collection of stamps would cement the wish to collect stamps for a beginner collector, in my humble opinion.

Pictured above the traditional dance la mateixa from Mallorca.

Many countries take pride in the heritage of their traditional folk costumes, detailing at various degrees of individuality the differnet local flavors and epochs of the making of the traditional costume. Romania is no exception to this rule, its vividly colored and intricately woven traditional clothes being given voice on stamps on various occasions. Some regional varieties find themselves also on stamps of other countries as well – Moldova is one such example, due to the common heritage, but also Poland and Thailand rendered homage to Romanian traditional folk costumes in joint issues with Romania.

I excluded from the article examples of stamps in which the focus falls on something different than attire – the stamps featuring traditional folk costume but dedicated to traditions, dances, historical scenes, etc. – these deserving their own articles. I concentrated on the ones which showcase the varieties of local folk costume from traditional Romanian regions.

Let’s start with this early example of Romanian folk costume on stamps, issued in 1936.

Although present in Europe for at least one millennium and part of the daily life of cities and villages, Romani people did not find their proper representation on stamps. In fact, it is only in recent years that they do so, mostly at the level of ‘minority populations’ and mostly in schematic representations. What is curious about this story, as is of any representation story, is that it seems that these again are stories told in the third person, with the Romani subject being in fact turned in an object. The different postal authorities which made what seems a positive step in representation still have some work to do to promote self-representation, without stereotypes and without implicit meanings.

There are not so many stamps representing Romani people, but there are luckily some that escape the ‘ethnic’ representation of anonymous Romani persons, and make a positive step in representing known and named Romani personalities. More on this below.

The term pisanka is but an umbrella term, as many other words are used to describe the several other techniques of painting and decorating Easter eggs in Poland. Kraszanki (or, malowanki, or, byczki) are just painted in natural dyes, but in some regions the word is used for all pisanki. Drapanki (or skrobanki) are kraszanki on which additional craftwork is being used, such as with a sharp tool to reveal the white of the shell in intricate patterns. Pacenki are similar in looks to drapanki, but instead they are painted additional decorations. Naklejanki are being decorated instead with leaves and papier mâché. Last but not least, oklejanki (or wyklejanki) are decorated with yarn, that allows them to reveal imperfect patterns created by diverse degrees of dye impregnation.

In this article, we are going to look at the definitive stamps issued by Polish Post between 2014-2019 before Easter. The design of the stamps is provided by the artist Agnieszka Sancewicz. Most of the stamps are pisanki, but in recent issues other types of pisanki are being shown as well.

The first stamps of the definitive series were issued in 2014, with two stamps featuring Easter Eggs from Opoczno and Puszcza Kozienicka.

The short-lived Protectorate of Gilbert & Ellice Islands existed between 1911 and 1975, when it was separated into two autonomous territories, Kiribati and Tuvalu. There are less than 250 stamps issued for this protectorate, but all of them strike by their interesting colors, relative exoticism, and straightforward celebration of local diversity.

The world of traditional costume and traditional activities was at the core of their first full-color definitive series of stamps in 1965. They were reissued and surcharged between 1965 and 1968, coinciding with the change of currency that occurred in 1966 – from the pre-decimal £ to the decimal Australian $.

For description, see above under the surcharged definitive series.

We continue our series of articles devoted to the traditional costume. Next stop – Greece. Greek traditional costume is pretty well-known worldwide. However, its local variations are not just as well known. With a lot of local, Balkan influences, from Bulgarian to Turkish, and from Albanian to Serbian, the monolithic traditional “Amalia dress” (called so because it was “designed” by Amalia, consort of King Otto of Greece in the 19th century) gets lots of local variables.

In general, the Greek costume the way we know it today, has a romantic tinge – needless to say, because it was devised in the 19th century, when the need of local identity markers was quite high throughout the region. On the one hand, the wish to have something local added sartorial elements to the traditional body of dresses, fustanellas, fezes, kalpakis (toques) or stivania (boots). On the other hand, the need to diversify the traditional costume regionally meant that different resources were researched in order to pick up and revive elements that had long been out of use. Nowadays, these clichés of traditional costume persist – however, their use is of course limited to special events. The only daily appearance of traditional costume is the Presidential Guard in Athens – quite showy, I would say.

END_OF_DOCUMENT_TOKEN_TO_BE_REPLACED

In the 1960’s, Spain issued two long series of stamps – one was devoted to coats of arms, the second one to traditional costume. What strikes as very unusual in these two collections is the fact that stamps were issued in singles – to the extent to which we can think of the coats of arms series as 57 single stamps and the traditional costume one as a 53 single stamps). Needless to say, the stamps are reunited by common design and a common title. However, being singles, they are harder to assemble now – almost 50 years later, because of the risk of getting too many doubles and not filling out the actual collection.

As an instance of imagery, the stamps are telling a story unlike the one of the Spain we know today. It is still here and there colonial(ist) and therefore to the continental design of costume you can also see glimpses of colonial costume (Fernando Poo, Sahara, IFNI). At the same time, the costumes are minutely designed, probably in order to build up local differences, even where they did not exist. It is hard to see the resemblance between instances of attire even from the same region (for instance from Barcelona and Tarragona), and this is because the notion of diversity hijacked the one of authenticity.

However, the entire set is a pleasure to look at. Below you can find the 53 stamps from the series in their order of issue. They were issued between 1967 and 1971.

END_OF_DOCUMENT_TOKEN_TO_BE_REPLACED

I am not a big fan of EUROPA stamps, but when they are matching one of the topics I collect, I become all of a sudden more interested. Therefore, I have only a couple of complete EUROPA (CEPT) years in my collection – as long as it keeps alive my topical interests. One such occasion was the issue from the year 1976, when the selected topic was Handicrafts.

As many as 27 countries participated in the initiative. 1976 was the third year in the history of EUROPA stamps when each country could opt for their own design (up to 1973 the EUROPA issues featured the same design across the adept geographies). It’s an interesting collection, getting sort of harder to assemble in recent years, but still attainable. Below you can find the entries from the 27 countries (Andorra and Cyprus being counted twice due to their 2 autonomous postal authorities). 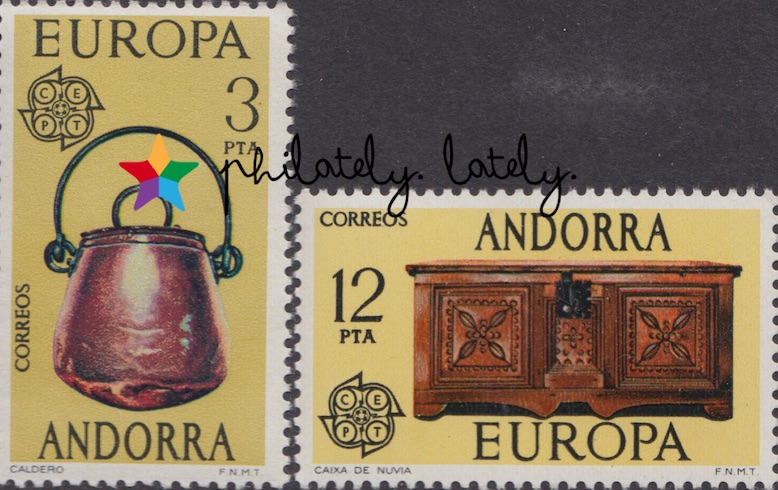