Visually, there are two almost immediate images that pop up in one’s mind when thinking about Lewis Carroll’s “Alice in Wonderland“: the vintage illustrations of John Tenniel, and the Disney movie images. Normally people balance between the two when they think about the book. Newer images sort of strike as odd – and I have to confess I have the same feeling, unless it’s the illustrations of Yayoi Kusama – now that’s something I would like to see on stamps one day!

But coming back for a second to the compelling images of “Alice in Wonderland“. Tenniel’s 92 “Alice” images, including the ones which were not published in the original “Alice”, are now stored as blocks of wood in the Bodleian Library at Oxford. They are the drawings that made Tenniel equally famous as Alice – although his career as an engraver went a lot further than that. They were on display only once since being housed in the Library – in the year 2003. Walt Disney actually bought film rights for Sir John Tenniel’s images before he embarked on the 5 year creative struggle to bring Alice to the screen. Of course, this happened 67 years ago, so the techniques used were far more rudimentary than the ones used today. But still – if you don’t see the immediate resemblance in images, you should know that both sets of images are interconnected.

Why is that important for philately? Well, because these two prevailing images are most often found on stamps. On rare occasions, someone pens new “Alice” images, but you should be the judge of the effect. I personally am not a big fan of such transgressions.

By far the most prolific offer of stamps inspired by the universe from “Alice in Wonderland” comes from Great Britain. The first such stamps were issued in 1979 – Great Britain’s choice of stamps for the International Year of the Child. While many countries chose to illustrate this theme with stamps related to childhood images or even with awareness raising images for better education and healthcare for children, Great Britain put on stamps four classics of children’s literature, among which you can also find “Alice”. 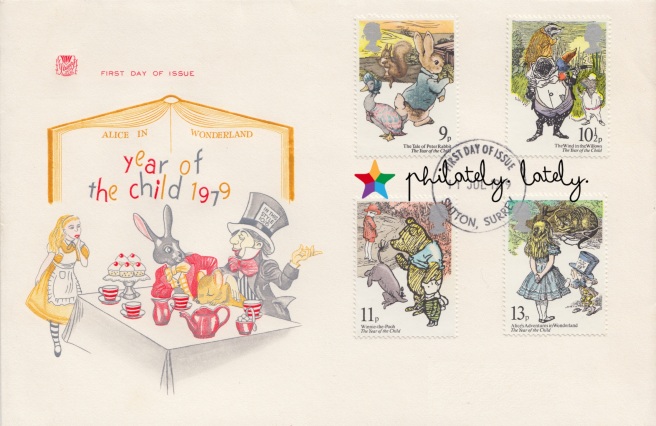 Pictured above, the 1979 stamp set and the First Day Cover. Presented, left to right: Winnie-the-Pooh, Alice in Wonderland, The Tale of Peter Rabbit, and The Wind in the Willows. The stamps were re-issued also as a sheet in 1980, one year later for the EUROPA 1980 exhibition devoted to the International Year of the Child. The stamps are rendered non-postal by the crossing-out of the left top corner – a sign that the sheet was used to accompany tickets for the exhibition and no longer had postal value. 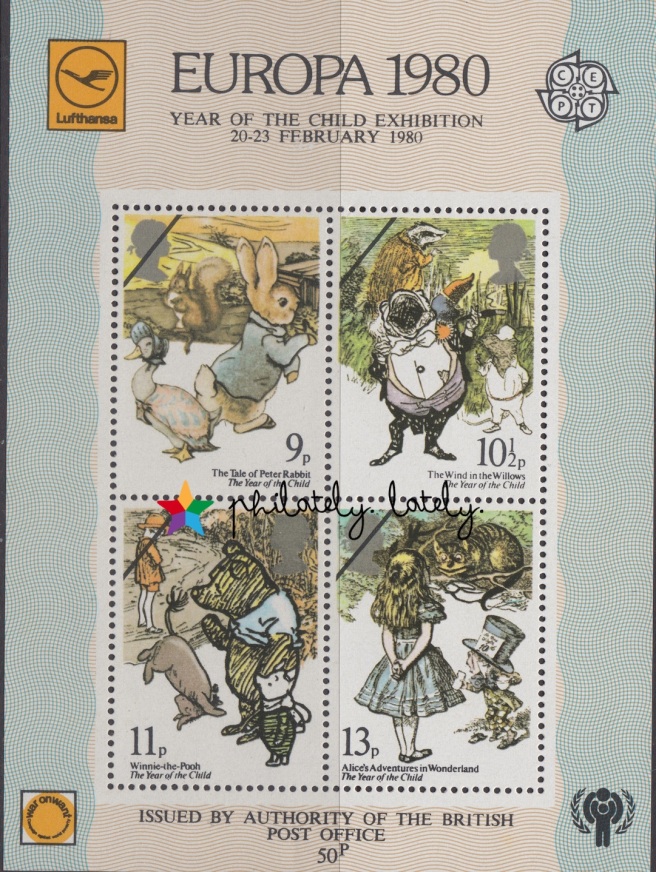 Since 1990, Great Britain is also issuing irregularly greeting stamps. The first series of such “smilers”, as these stamps are also called, actually was devoted to smiles. Of course the smile of the Cheshire Cat could not be missing from the set.

The 1990 set of smilers was re-issued a couple of times. Most notably again in 2000, for the London Stamp Show. 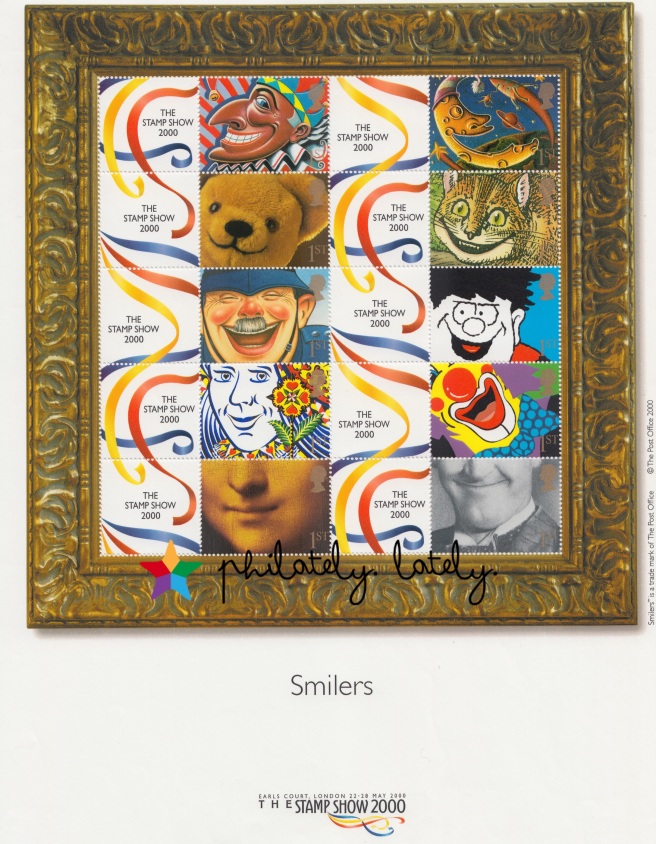 Another set of smilers which includes a great “Alice” stamp was issued in 1993.

Pictured above the 1993 set including a Tweedledum and Tweedledee stamp (first row, second stamp, left to right).

And since the series of smilers stamps were getting so popular, it did not take long until another great set was issued, in 1994. 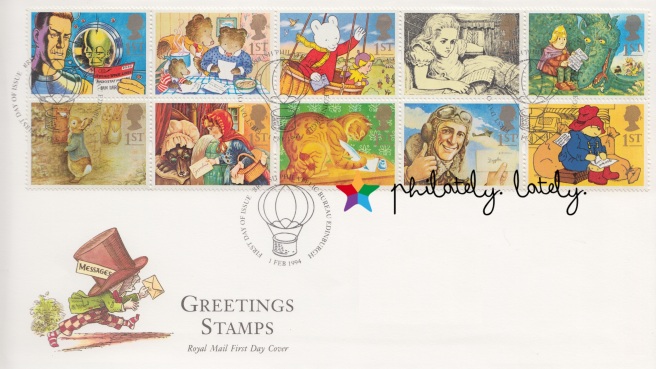 The “Alice” stamp in the sheet (first row, fourth stamp, left to right) is one of my favorite Alice stamp. A grown-too-big Alice is struggling within the frame of the stamp. Genius!

After a short break in the production of “Alice” stamps, Great Britain returned in 1998 with a serious proposal: a five stamp set devoted to fantastic children’s literature. 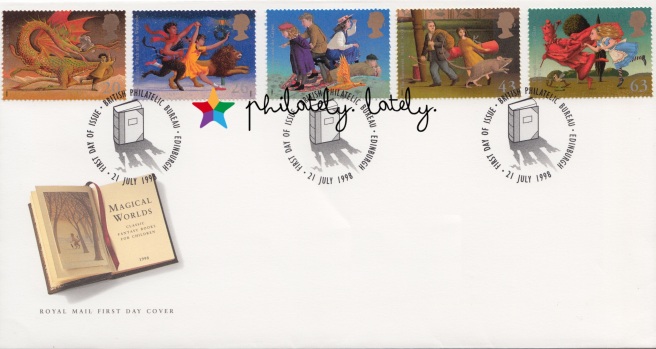 Last but not least, in 2015, Great Britain issued a 10-stamp set celebrating the 150th anniversary of “Alice in Wonderland“. Although they are not my favorite kind of visual universe, they are quite appealing in some sense (look at the stamps with Alice and the playing cards or at the Mad Hatter’s tea party).

Alderney was also impressed with the 150th anniversary of “Alice in Wonderland” and issued in 2015 a set of 6 stamps and a minisheet devoted to the universe thought up by Lewis Carroll. 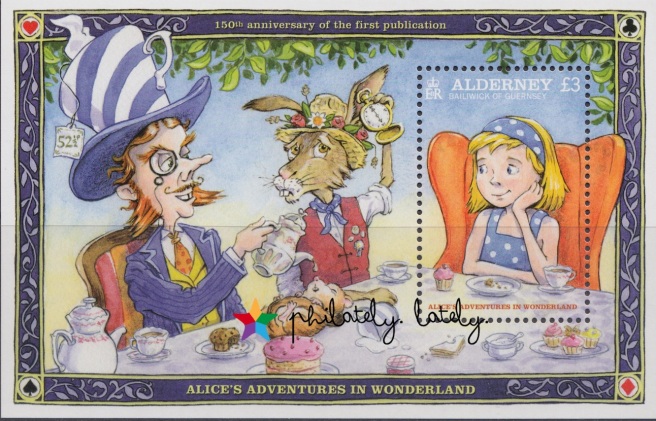 Not the greatest design (I’ve definitely not imagined Alice “that way” in any of the multiple readings of the book), but probably more adapted … er … to younger audiences?

Maldives issued a Disney movie inspired set of nine “Alice in Wonderland” stamps, accompanied by a midsize minisheet in 1980. 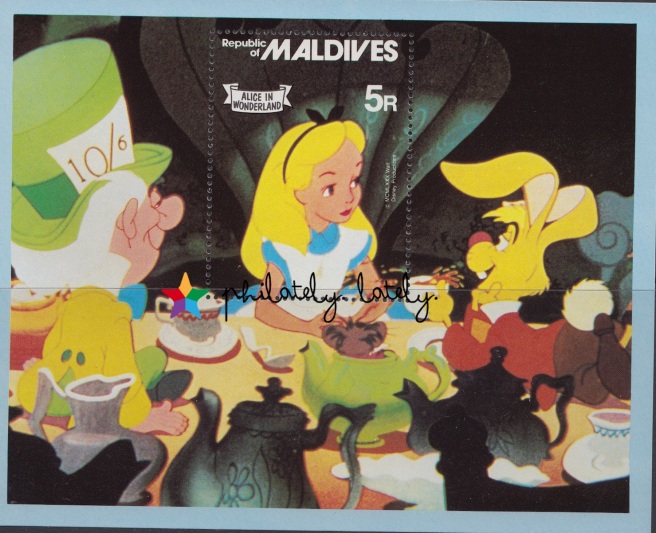 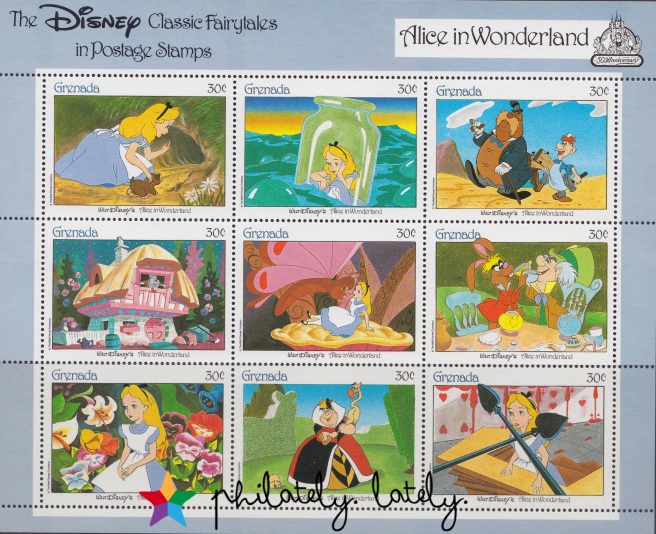 * with the exception of the London Stamp Show sheet, which is a limited edition and its price range is high.

9 thoughts on “Alice in Wonderland on Stamps”