French philosopher René Descartes (1596-1650) left to us a strong legacy, including the famous saying “I think, therefore I am”  (French: “Je pense, donc je suis“). He also inspired the newly coined phrase “Cartesian anxiety,”, which represents the hope that studying the world will give us unchangeable knowledge of ourselves and the world – an awkward thing in our post-modern times.

Today we’re going to talk about an error on stamps. Stamp errors are pretty common, actually, whether they are related to a flaw of printing (wrong framing, or missing colors) or to the information provided on the body of the stamp. The story takes us back to the year 1937 – when France, for the 300th anniversary of Descartes’ “Discourse on the Method” issued a stamp. In fact, it had to issue it twice.

The full title of Descartes’ masterpiece is “Discourse on the Method of Rightly Conducting One’s Reason and of Seeking Truth in the Sciences“, and despite the long title it’s quite an interesting read, even for the minds of contemporaries who are dealing with TMI and FOMO day in day out. It’s still fresh, not at all boring, and it can provide you with hours of musing on the nature of thinking and our superman-like ability to think.

The first stamp that was issued was released on May-24, 1937. It features an engraving of the known portrait of René Descartes by Dutch painter Frans Hals with an intricate backdrop – where we can see the title page of his best known work. 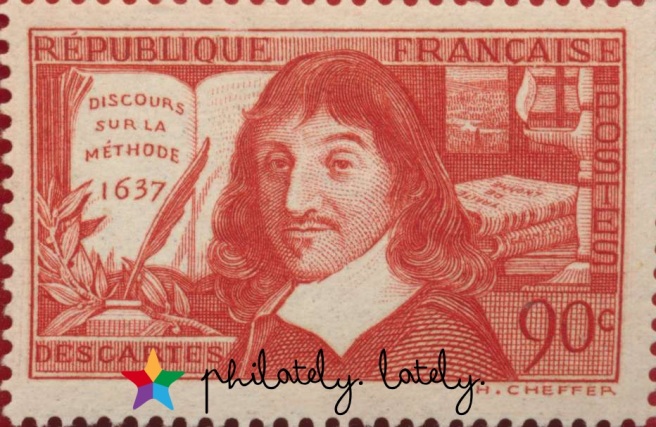 But wait! The title of the book is written wrong. Just before the release day, postal authorities were alerted and the mistake was discovered, however some of the stamps made it into public circulation.

The postal authorities decided to mend the error immediately, but it was not before June-09, 1937 that the second printing, with the correct title was made public. The remaining stamps of the stamps from the first printrun were pulped, unfortunately, but a few thousands remained in public circulation. 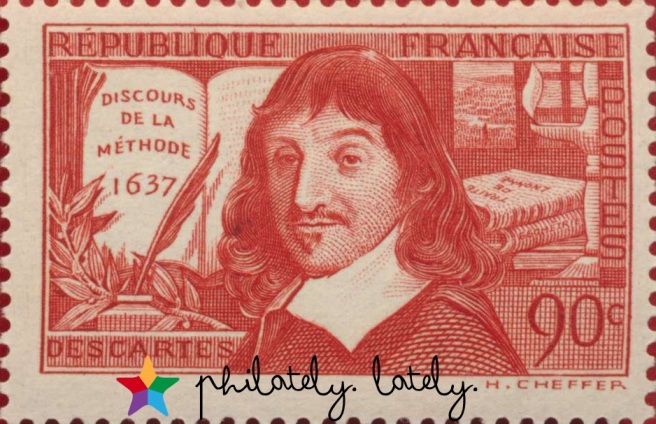 As you can see, nothing but the name of the work was changed on the stamp – but do you think this made philatelists more interested in the historically accurate stamps? No. To date, the most valuable one is the stamp containing the title error. This shows how petty stamp-collectors are, poking fun at people’s errors! Of course, I’m joking, but the truth is, the stamp containing the error catalogs a higher price than the correct one even today.