Anne Frank is one of my all-time heroes. Although she needs little introduction, being one of the most known victims of the Holocaust, few people think about how important the testimony of Annelies Marie Frank (12 June 1929 – February or March 1945) is in today’s world. Her diary went all the way from banned book (as is in Lebanon), to a non-recommended book (a school committe in the US deeming the book to be “a real downer”), and up to compulsory reading.

Nowadays, Anne’s universe still elicits a lot of interest worldwide. More than 1 million people visit yearly her hiding place in Prinsengraacht 263, in Amsterdam, where she, together with her family and four other people stayed in hiding, without seeing light or going out for 2 years (between 06 July 1942 and 04 August 1944). New pages of her diary have just been discovered a couple of months ago – so the final version of her diary, known as “Anne Frank’s Diary” or “The Secret Annex” (the latter being a literal translation of the Dutch original “Het Achterhuis“), is soon going to be revised.

Revisions of her diary happened many times since the first publication of the Diary in 1947. Several fragments were added, which were considered initially extraneous to the diary, or that were considered unfit for a young audience. The Diary underwent a lot of cosmetic work until it reached what was called “the Definitive Edition”, but in the meantime, more than 35 million copies of her book were sold, in more than 60 languages.

Anne’s message is always a peaceful and mature one, way beyond the real age she had when she was writing her diary. “In spite of everything, I still believe that people are really good at heart.”, says one of her most repeated quotes. “How wonderful it is that nobody need wait a single moment before starting to improve the world.” is another one, which remains a true example of Anne’s food for thought.

There were Anne Frank movies, animations, cartoons, spin-off’s, basically there’s a little bit of everything decent that carries on the message of Anne Frank. Of course, there are also numerous Anne Frank stamps, about which we are going to talk a little today.

The first Anne Frank to be issued was in the Federal German Republic in the year 1979. 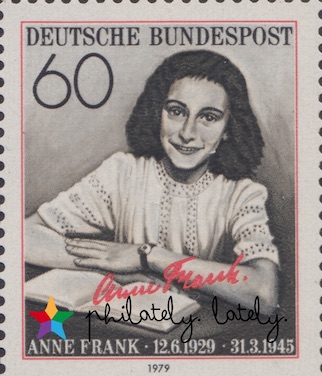 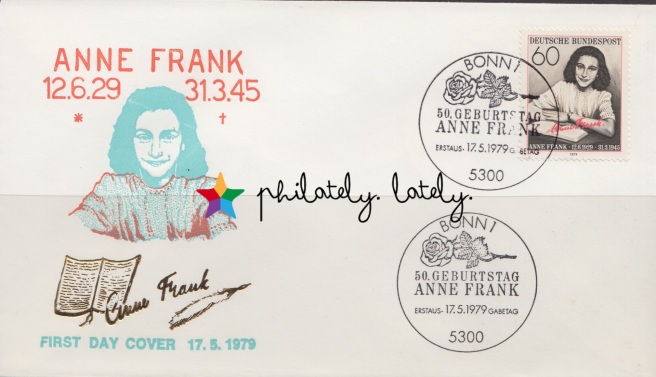 One detail that is often overlooked is the fact that this stamp also features a concrete date for the death of Anne Frank. The date is debatable, especially in the light of recent research and interviews with other survivors, as Anne Frank might have died any time between February and April 1945.

Though Brazil did not issue a stamp devoted to Anne Frank, they used her image for the First Day Cover featuring one of their stamps for the 1979 International Year of the Child.

The stamp on the First Day Cover refers to the 50th anniversary of birth of Anne Frank, just like the German counterpart.

The first Dutch stamps devoted to Anne Frank were issued in 1980, for the 35 year anniversary of liberation.

The Netherlands issued again Anne Frank themed stamps in the early 2000’s, when they started to issue state-owned personalized stamps for the series “The Canon of the Netherlands”. The Anne Frank series comprises 2 stamps. One of the stamps features Anne’s school portrait, while the other an image from the Anne Frank House in Amsterdam, which is the museum of the hiding place of the Franks. It shows the bookcase that hid the staircase from which one could get into the hiding place.

The stamps are sold in a sleeve that continues the design of the wall. The three personalized stamps present a contemporary view of the building in Prinsengraacht 263, the hidden staircase, and the first page of Anne’s diary.

Last but not least, in 2016, for their “Year of the Book”, the Dutch post issued stamps honoring literary pearls written in Dutch. Anne Frank’s “Secret Annex” is featured on the sheet. 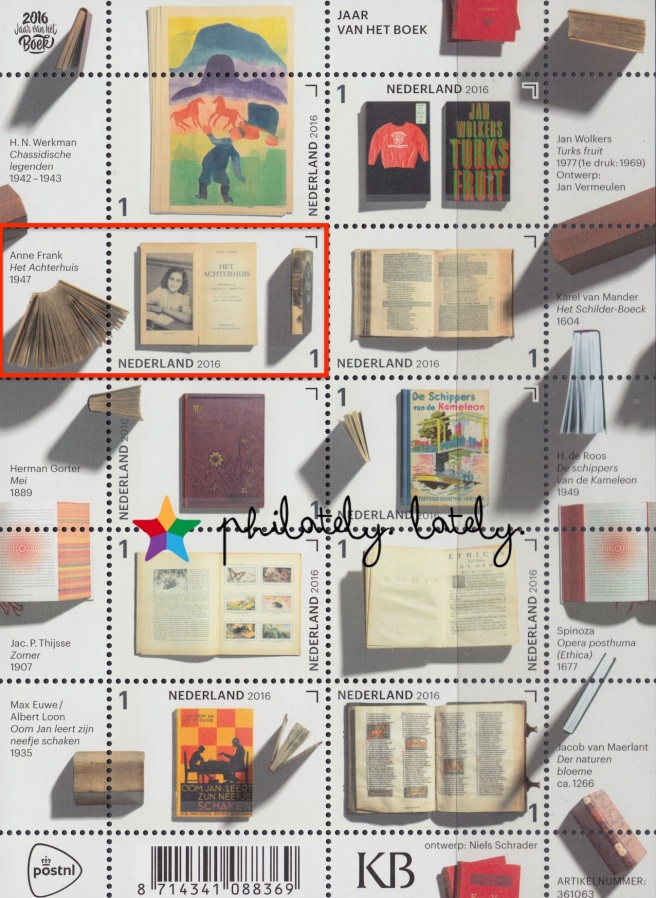 Israel issued an Anne Frank themed stamp in 1988, making it the third country in the world to devote a stamp to the teenage diarist after Federal Germany and the Netherlands. 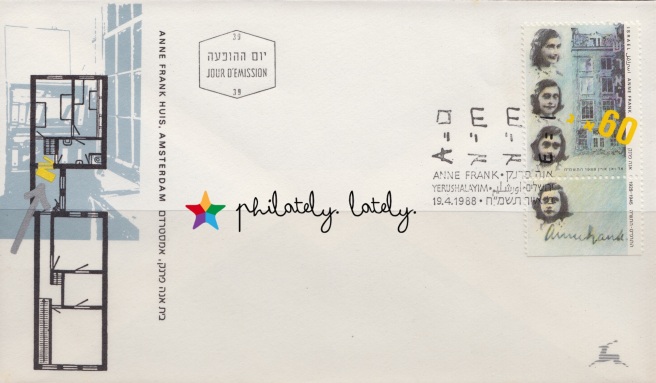 Featured above, the stamp and the First Day Cover. The stamp on the First Day Cover presents Anne’s name written in the secret code she invented herself in order to hide potentially threatening or too intimate recordings from her diary from the prying eye.

Surprisingly, the next country we are going to talk about is the Dominican Commonwealth – which issued for their Millennium collection issued in 1999 a large sheet featuring historic events from the 1940’s.

The stamp depicting Anne Frank can be found on the top row, fourth position from left to right. 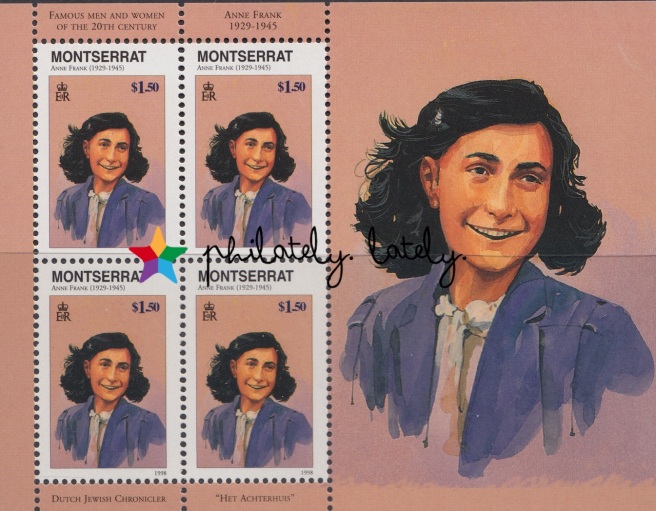 Montserrat devoted one stamp to Anne Frank in 1998, for their series entitled “Famous Men and Women of the 20th Century”. Anne Frank is presented as a “Dutch Jewish Chronicler”.

Though the authenticity of stamp releases from Guinea Bissau from the 2010’s is often contested, there is equal amount of proof that the Anne Frank themed stamps they issued in 2015 are and are not authentic. On the one hand, most catalogs gave up on listing new issues of Guinea Bissau, which seem to be in the range of hundreds each year, and which more than often have debatable design. However, there’s also proof in favor of the authenticity of the issue, given the recently discovered First Day Cover that accompanies the issue. 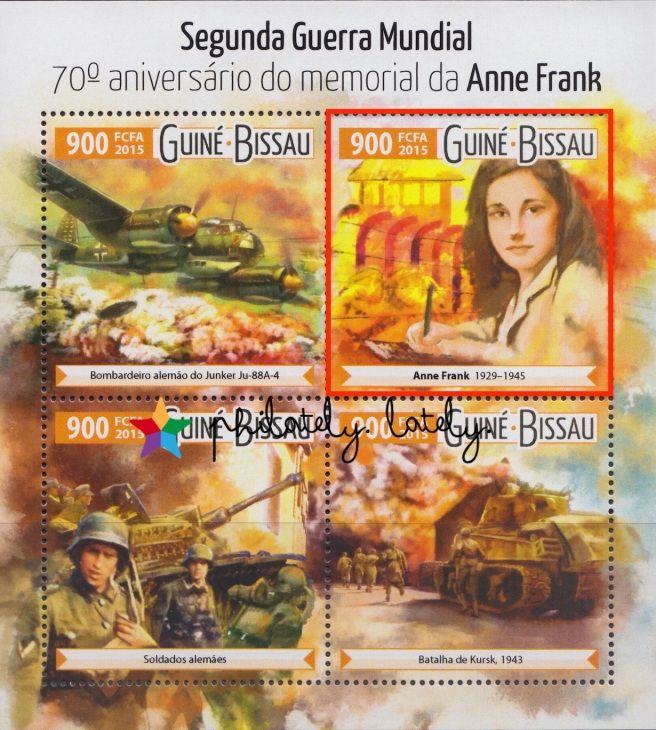 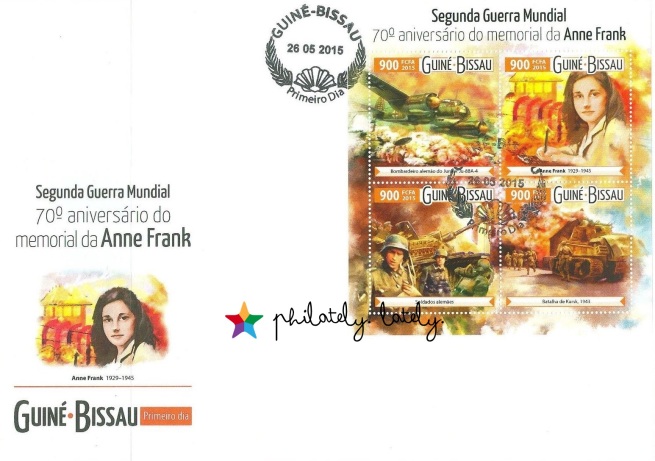 The issue refers to the 70th anniversary of the end of WWII, and Anne Frank’s image is used to represent one of the facets of this terrifying event. Her image is metamorphosed, however, resembling little the original pictures of Anne Frank that are still available.

Stamps featured in post: 42; Period: contemporary (1979-2016); Pricing: low; Availability: with the exception of the early issues from the Netherlands, Federal Germany, and Israel, most items are scarce.

4 thoughts on “Anne Frank on Stamps”